Elite Sealcoating became the leading full service asphalt paving company in the Beaumont TX area by working with integrity and transparency. For over fifteen years, we’ve been paving, repairing, and maintaining all kinds of pavement from parking lots to subdivision roadways. We work with HOAs, property managers, business owners, and homeowners to find the right paving solutions for their properties in Southern Texas and Louisiana.

As the county seat of Jefferson County. Beaumont, TX is a regional hub for transportation, employment, education, and entertainment for Southeast Texas. Located just over 80 miles from Houston TX, Beaumont had a 2010 population of 117,267, according to the US Census Bureau, making it the 30th most populous community in the Lone Star State. The area was first settled in the 1830s and relied on faming, lumber, and shipping, but it soon exploded when the Spindletop suddenly began producing copious amounts of crude oil. That transformed the area, and now Beaumont and surrounding communities are also known for their petroleum industry and refineries.

The Spindletop-Gladys City Boomtown Museum celebrates the historic discovery of oil in 1901 with historical reenactments in a period town, exhibits about oil and Texas history, as well as regular community events. Nature lovers will have a great time at the Beaumont Botanical Gardens or nearby Village Creek State Park, or take a scenic hike at Cattail Marsh Scenic Wetlands & Boardwalk. Tyrrell Park is another scenic area that also has a playground and golf course. Beaumont also has a wealth of cultural sites with several museums, including the Texas Energy Museum, the Art Museum of Southeast Texas, the Beaumont Children’s Museum, and the Beaumont Art League.

Beaumont TX is part of what’s called the Golden Triangle, along with Orange and Port Arthur TX. Let’s explore some of the other communities in the area.

Located 90 miles from Houston, Port Arthur had a population of just under 55,000 as of the 2010 Census. Home to the largest oil refinery in the United States, Motiva Refinery, Port Athur isn’t just an oil town, but also features lots of ports and shipping employment. The area is vulnerable to hurricanes, but the resilient population has rebuilt often, and several historical buildings remain to this day, including the Hotel Sabine, built in 1929. Visitors to the town can learn about the area at the Museum of the Gulf Coast or enjoy shopping at Central Mall.

Also considered part of the “Golden Triangle” comprising Beaumont, Orange, and Port Arthur, Nederland is a quaint small town with a 2010 population just under 18,000, and it was settled in the late 1800s by Dutch immigrants. Located next to the Jack Brooks Regional Airport, Nederland TX is an important prot and source of blue-collar workers for the many refineries in the area. The name means “lowlands,” in Dutch, but the area has fully embraced Cajun culture today, with many different Cajun restaurants and a vibrant hunting and fishing community.

Another important town in the greater Beaumont TX area is Groves TX, which had a population of 16,144 as of the 2010 US Census. In the early 1900s, several acres of pecan trees were planted in the area. Soon afterwards, Port Arthur municipal authorities planned a subdivision in the area called Pecan Groves. A community grew up around the subdivision, with a post office, school, and library following. As the town grew due to the opening of railway stops and refineries, the name was shortened to just Groves, creating the town locals love today. The Lower Neches Wildlife Management Area provides plenty of spots for enjoying nature, boating, fishing, and hunting.

Founded on a high land bluff near the Neches River, Port Neches TX had a 2010 population of around 13,000. The area had been a Native American community for over a thousand years, resulting in a number of burial mounds that are still being excavated today. In the mid 1800s, European settlers moved into the area, taking advantage of local wetlands and access to the Gulf of Mexico for shipping goods. Fort Grigsby was a Confederate fort in the area before it was moved, but visitors can still learn about the area’s history at one of the many history museums like the Dutch Windmill Park. The “Tex” Ritter Historical Park celebrates country music history and explores the life of the singer.

Nearby Beaumont but in Orange County, Vidor TX had a population of 10,579 according to the 2010 US Census. Vidor is considered a bedroom community for the many refinery communities in the area, including Beaumont, but it has its own charm. The community began as a lumber town, named after Charles Shelton Vidor, owner of the Miller-Vidor Lumber Company, which operated during the early 1900s. When the lumber mill moved, a subdivision remained that blossomed into a vibrant small town. The town was associated with the Klu Klux Klan for many years, but has moved away from its past in the 20th century. Like many towns in the area, Vidor is known for its natural beauty and opportunities for fishing and hunting.

Pavement maintenance in Beaumont is our business here at Elite Sealcoating LLC and we are proud to serve the local property management companies based in this area.  We just recently wrapped up a parking lot maintenance project that included sealcoating and line striping in Beaumont TX.  This large bix box client of ours also needed some ADA pavement markings while we were on site so we were happy to take care of that as well!  More details to follow, stay tuned! 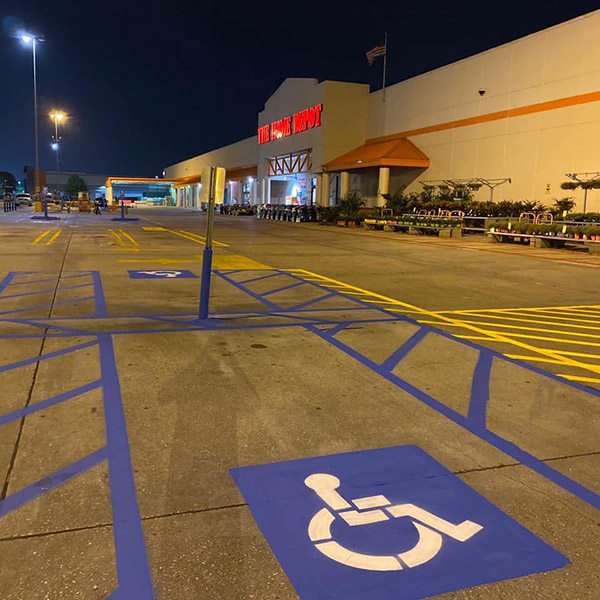